Menu
Get a Free Estimate

Home / Read Our Blogs / Electrical Safety For Kids: 10 Safety Tips For Your Children 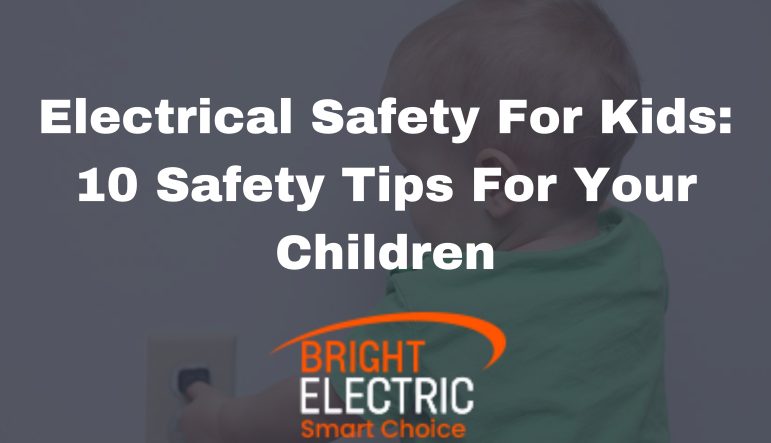 Electrical Safety For Kids: 10 Safety Tips For Your Children

Electrical risks and dangers lie in homes, waiting for someone or something to uncover them. Although it is used daily, electricity may be quite deadly if specific safety precautions are not taken. Furthermore, children are inherently inquisitive. As a result, children should be educated about the foundations of electricity as well as the dangers of electricity. Introduce safety recommendations for children at a young age so that they understand the consequences of irresponsible electrical handling for an electrical safety inspection. Parents who want to protect their children from electrical risks might utilize the resources listed below to educate them.

Children should be educated about the hazards of playing with electrical wires. If something sticks or becomes entangled on electricity lines, they should not attempt to remove it; instead, they should contact an adult, such as a parent. They should be warned not to touch the lines with any part of their bodies or to hurl things at them. Remote-controlled models such as helicopters, drones, and aircraft should never be flown near power lines; instead, they should be flown in broad areas.

3. Water Increases The Danger Of Electricity

This is critical for safeguarding the electrical safety of children. Water and electricity are not good mixes and should never be combined, according to parents. When the children are small, teach them not to touch or operate any electrical gadgets with damp hands. They should also refrain from using electrical items in damp locations such as sinks and baths. They should unplug such equipment before cleaning them.

4. Keeping Away From Power Substations

Keep your children away from the power station no matter what. It’s a parent’s responsibility to be vigilant when they are playing with the fences or trees around any power stations.

5. Staying Away From Electrical Wires And Lines

Children should be advised about attempting to assist individuals who have come into touch with live electrical lines. Assume your pet, a friend, or a family member gets involved in an accident involving electrical lines. In such instances, they should dial 911 or, better still, a responsible adult. They should never come into contact with downed electrical lines or climb utility poles.

When plugging in chargers on sockets or even electrical extensions in most households, children and even adults utilize sharp and metallic things such as keys, spoons, nails, scissors, and similar devices. This is extremely risky since it might result in electrical shocks or worse. Parents should warn their children about this dangerous practice.

7. Electrical Appliances In Use

Parents should urge their children, depending on their age, to always seek adult assistance while dealing with electrical items at home.

8. Keep Your Kites Away From The Power Line

Warn kids from flying kites and stringing Mylar or helium-filled balloons near power lines. If the string becomes entangled on the power lines, electricity can pass through it and create a shock or a fire.

Parents should teach their children how electrical outlets and extension cables function and caution them against plugging too much into a single outlet. This might cause electrical damage or possibly a fire. Furthermore, because most family members rely on electronic devices, there is a possibility of overloading the electrical plugs, which should be avoided.

With this information in hand, parents are one step closer to assuring their children’s safety. If despite these measures, teachings, and recommendations, parents believe their home is still unsafe for children, they should consult an electrician. Ensure you get the finest residential electrician with a thorough experience of all the factors to consider when protecting your house from any mishaps, such as Bright Electric for any electrical repair services.

Our electricians can install anything from new electrical installations for your home and business to & whole home backup generator that will keep your appliances working during a power outage.